I wanted to go to Florence. The most influential city to span the transition between Medieval and Early Modern Europe. But this destination was dismissed by my travelling companion as she had been there before and suggested Venice instead. So we booked a three day package with British Airways.

The city is a collection of well over a hundred islands, some of them tiny and strung together by little hump back bridges. Its origins reach back to the flight of Roman refugees from invasion to inhospitable wetlands. Wood platforms were constructed on top of wood stakes driven underwater and somehow still support ornate and oversized buildings standing on stilts. 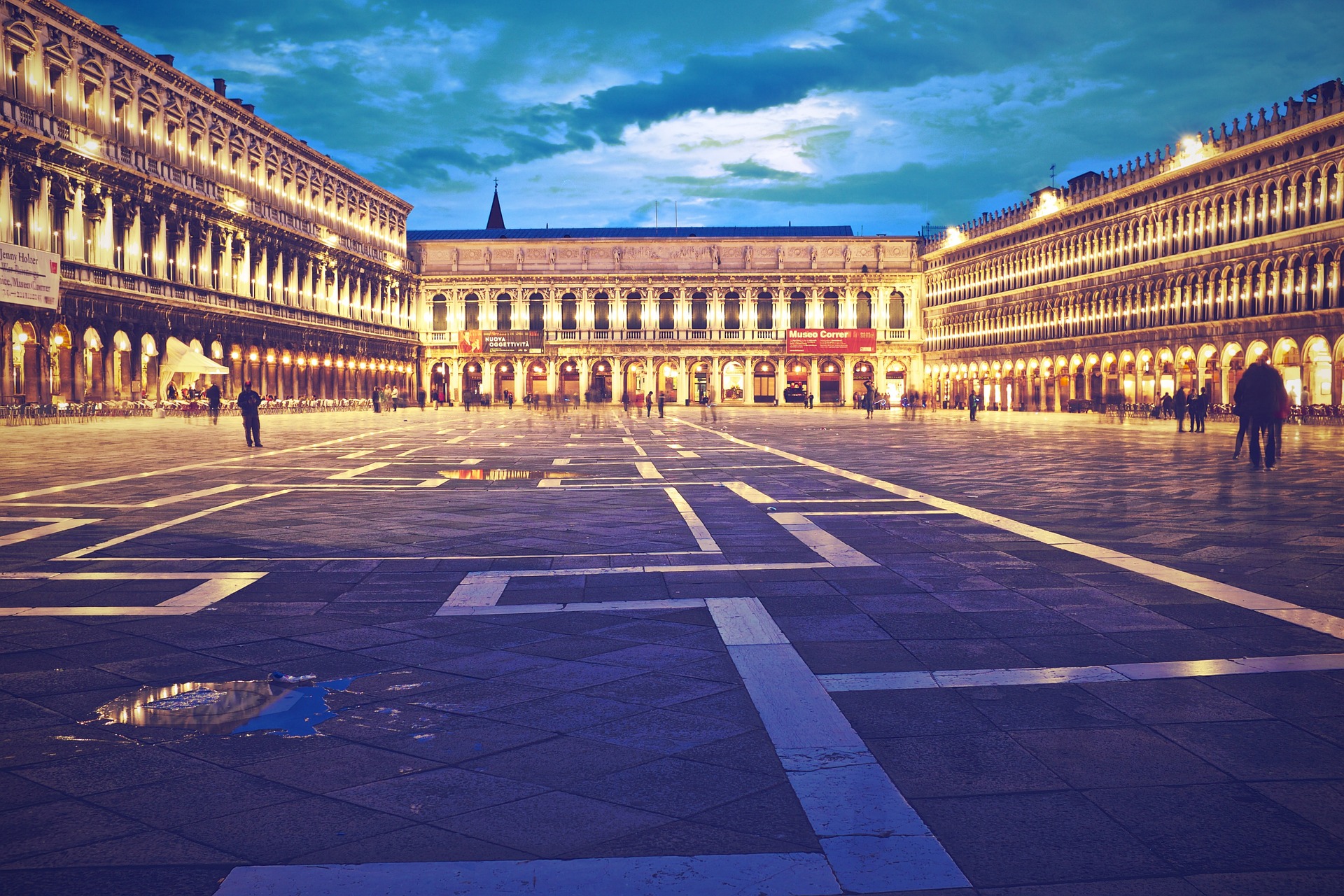 The journey from Marco Polo airport to the historic city centre takes over an hour. By boat. Water taxis take twenty minutes but are not priced for travellers on any kind of budget. Better to take a water bus.

We headed straight from our hotel to take a tour of must-see Piazza San Marco (St. Mark’s Square), planning to return next day to see inside the Basilica and Doge’s Palace. And, of course, to sample the cafes. Expect queues. Even in the colder months. But our late autumn visit avoided the crowds, heat and smells of the city in summer. 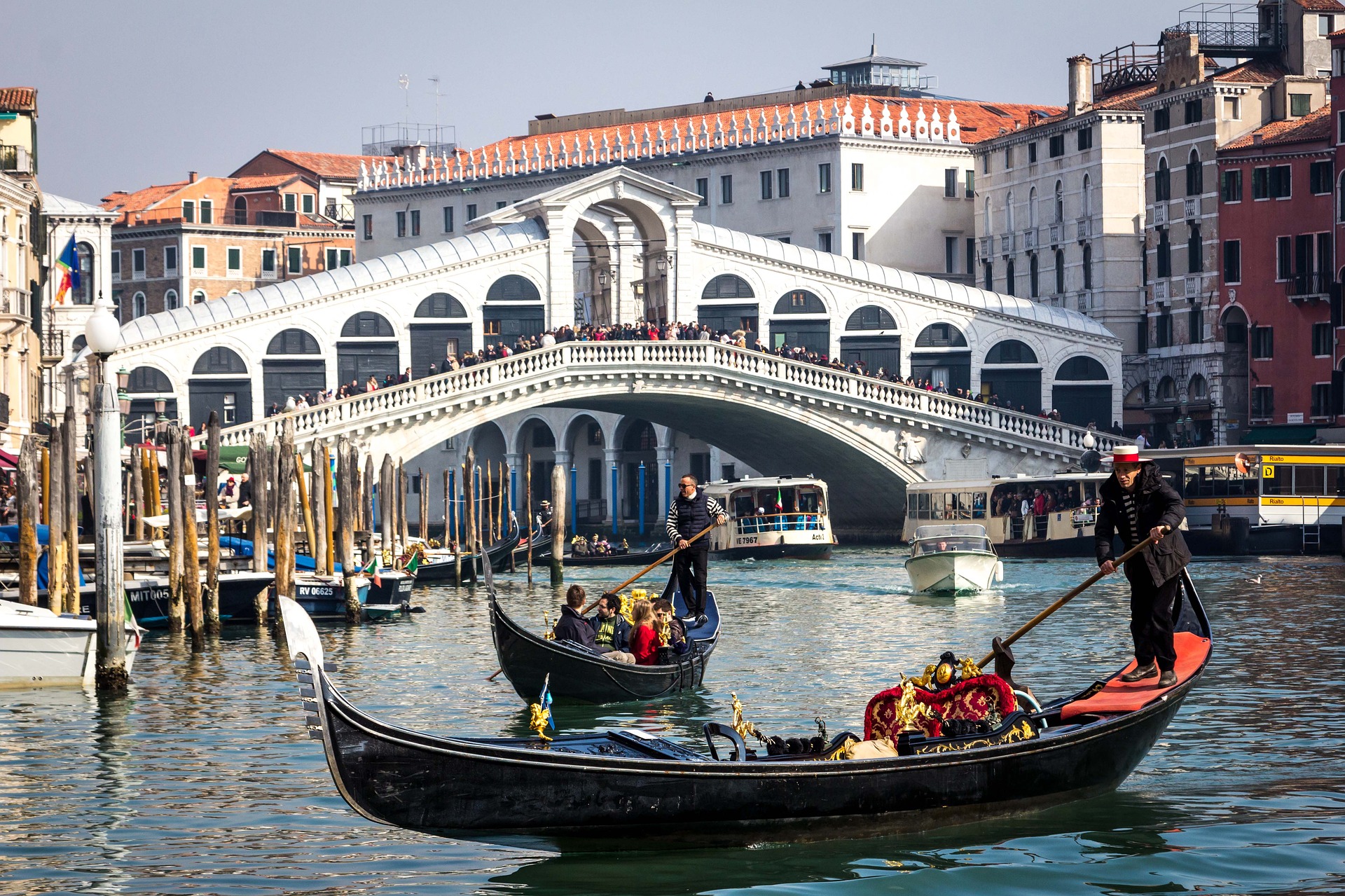 The Ponte di Rialto (Rialto Bridge) beckoned so we left the square, admiring the magnificent Torre dell’Orologio (clock tower) with its astrological clock face on our way. Meandering past shops, we followed the maze of twisting, turning pathways to the Canal Grande and emerged water side near the bridge.

Waiting on the not too busy bridge for not too long, a space soon cleared to allow us an unimpeded view. For several hours, we stood near the top of its steep and stepped arch, gazing spellbound and enjoying the view of canal life so familiar from Canaletto’s paintings – and seemingly unchanged in the two hundred and fifty years since.

Gradually, the vast expanse of a greying mackerel sky above Venetian Gothic architecture either side of the canal turned dull lilac. As darkness descended, red and gold lights gleamed against slowly silhouetting boats and buildings. Shivering after sundown, we warmed up with a piping hot pizza and a glass of house red.

We stayed at the Locanda Vivaldi, the former home of the composer and a convenient few minutes drag of our luggage from the nearest water bus stop. Not suggesting our hotel should have been playing the Four Seasons on a continuous loop (there were plenty of opportunities to hear the work at venues around the city) but there was disappointingly little indication of the hotel’s illustrious former resident.

As for Florence, I fell in love with this city whilst researching the Renaissance for a paper on Philosophy and Art. Venice, too, made its contribution to the Renaissance. Here, the availability of sail canvas enabled cheaper production of paintings that were easier to transport. When improvements in oil paint (attributed to the Dutch masters) and associated techniques (represented in Venice by the Bellini family, Giorgione, Titian and Tintoretto) combined with the durability of canvas and Florentine perspective, painting transformed.

Three days was exhilarating and exhausting. There are no cars, no scooters, no bicycles. On foot is by far the most efficient way to get around – often along narrow walkways that run the length of canals and up and over one of the little bridges; along and up and over; along, up, over.

There are gondolas, of course, but at sixty Euros for half an hour during daylight hours and eighty Euros after dark, these velvet lined floating ‘hearses’ (as Mark Twain referred to them) are an expensive way to travel. And slow, particularly when convoys cause a log jam. But for that price, they can take up to six people. Or one dead one.

Had we followed my preference for Florence, we would have missed the magic of Venice. Sparkling scenes of this unreal, ethereal city took our breath away every time we stepped outside our hotel and we found ourselves whispering, ‘yes, it really does look like that’. Which is why Venice receives twenty million visitors each year. And, no doubt, will continue to do so until rising sea levels and the city’s decent into the lagoon at the tip of the Adriatic Sea make it uninhabitable – anticipated within the next hundred years.

It is possible to get from the airport to the city centre by road. Just about. A bus will take you across Ponte della Libertia (Liberty Bridge) but then you are on your own to find your hotel on foot with your luggage from the bus terminal at Piazzale Roma. For most, this makes a water bus – Vaporetto – which connect the clusters of islands, unavoidable.

There is a train station at Venezia Santa Lucia which is near the bus terminal but the airport is not served by rail. Arriving or leaving the city by train is only an option for internal travel through Italy.

The advantages to visiting Venice in autumn runs a risk of weather warnings – the day we left, thick fog obscured almost everything and poor visibility caused cancellations on almost all Vaporetto routes. Earlier nightfall than in the warmer months means gondoliers put up their prices pronto.

Italian fare typically found in any of the many restaurants. Book for the better ones – if your bank account can bear it. That goes for the better cafes in St. Mark’s Square too.

The Gallerie dell’Accademia di Venezia displays works by artists mentioned but, for those with more modern tastes, a short stroll further along the canal is the twentieth century collection of Peggy Guggeneheim. This is housed in the eighteen century palace designed by Venetian architect, Lorenzo Boschetti (the Palazzo Venier di Leoni).

To the north of the city centre is the island of Murano, famous for its glass. Vaporetto make regular trips and, near the water bus stop, there are free glass blowing demonstrations. Factory tours are available at a price. Rows of shops overlooking canals sell glassware of varying quality – many items, it turned out, glass souvenirs made in China. If time in Venice is limited, forget Murano.