“One travels more usefully when alone, because he reflects more. “ Thomas Jefferson

I found myself in Morocco one spring week, having booked a last minute getaway to escape an impending stress-induced meltdown at work.

I settled on North Africa for guaranteed heat – a sure way to release tension.  Gambia had first sprung to mind, but it has an unfortunate reputation as a destination for ladies of a certain age to enjoy some toy boy company for the week.  As a childless spinster I suffer enough judgement as it is, without adding the assumption I have to fly to an impoverished country to get laid.  Nor was I interested in being pestered on the beach all week by men in padded Speedos.  I really just wanted to read a few books and relax, so my attention turned to Morocco. 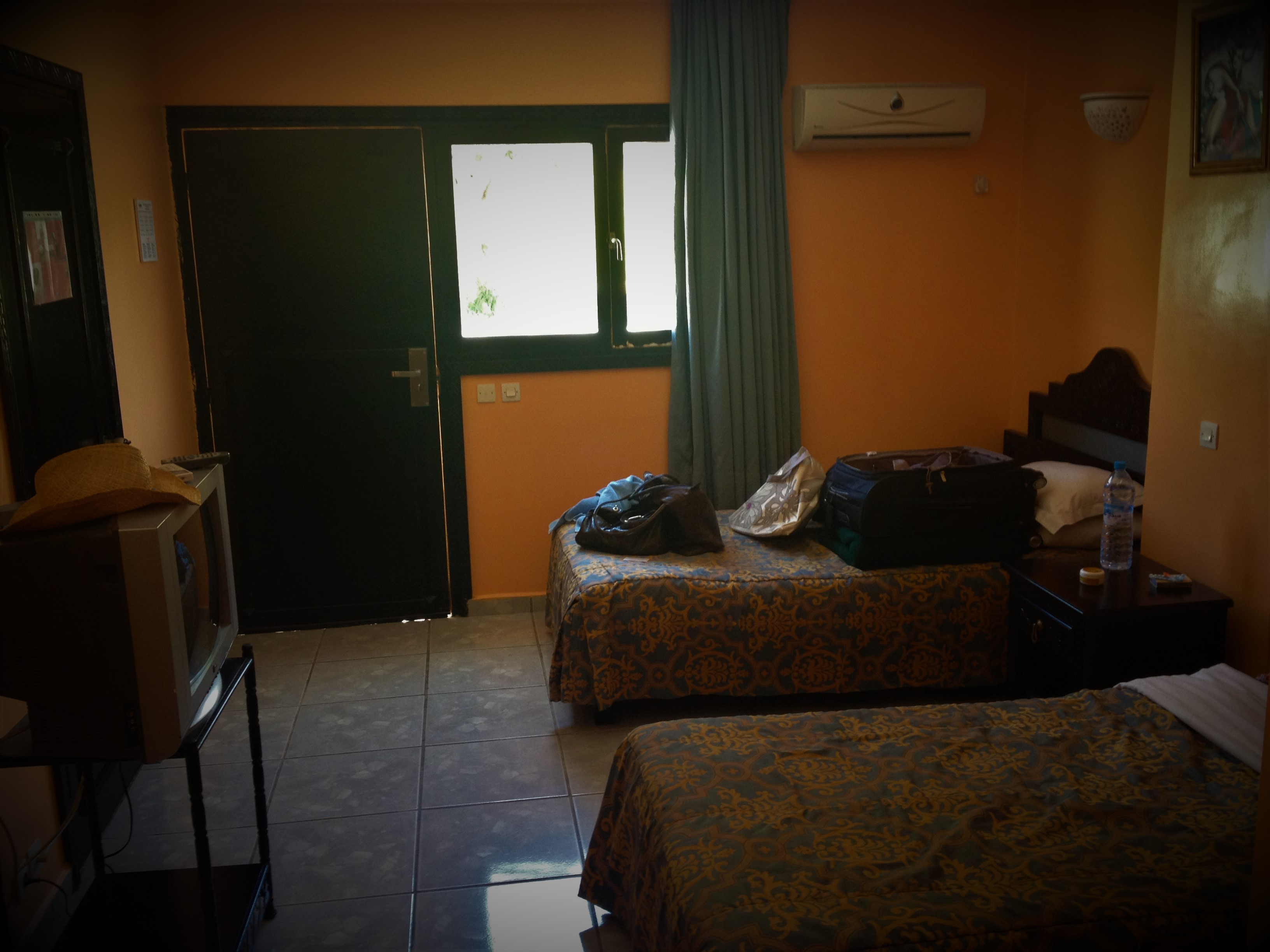 Having heard so many wonderful things about Morocco from friends, I was keen to take a look.  Marrakech was the obvious choice, but I really fancied a bit of beach time, so I chose Agadir.

I found a cheap deal in the Al Moggar Garden Beach hotel. As the name suggests, it was right on the beach with bright hotel rooms overlooking the gardens.  I dusted down my bikinis and packed my little suitcase.

On arrival, I found my room had one tiny window overlooking a wall a few feet away, with a migraine inducing mix of dark, dated decor and dubious looking bed sheets.  The four dead cockroaches on the floor were, I supposed, a budget replacement for rose petals.

On my immediate return to reception I was given keys to an alternative room, delivered with a death stare.  The alternative room only had one dead cockroach so I was mildly pleased with my upgrade.  Decorated to the same dismal standard, I almost had to feel my way around the room even with the lights on.  I wondered if perhaps the cockroaches had met their fate running into walls in the dark?

Still, I’m an optimist, so the following morning I packed my beach bag and headed for breakfast, ready for a day of Agadir delights.  Many a traveller has complained about hotel buffets, but I’ve always found them at the very least good, and sometimes spectacular.  This buffet, however, looked like a post war apocalypse.  I took my stale bread roll out onto the expansive concrete terrace to enjoy the view of a building site beyond which was a wall high enough to make Donald Trump drool.  It was at this point I realised the “beach” hotel wasn’t, in fact, on the beach. 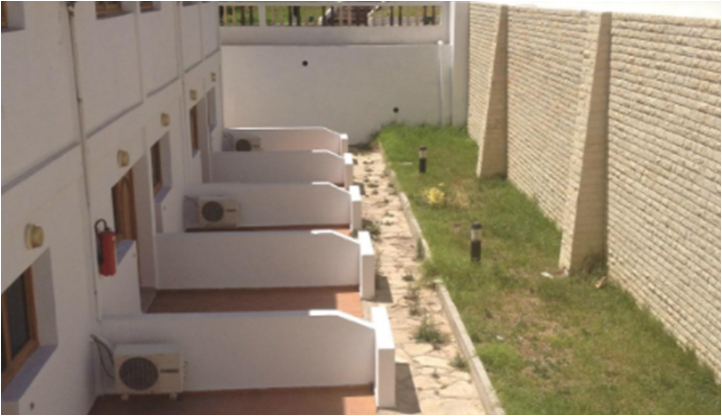 I’ve always enjoyed my holidays – mostly they are amazing, sometimes I have to look on the bright side.  I went in search of an escape route from the concrete compound and found a small gap in the wall leading to a boardwalk, and the beach.  The hotel had a small area roped off, packed with 30 sun beds, all now occupied at 9am.  Having booked this holiday specifically for beach time I considered the possibility I would have to employ the stealth ‘towel on sun bed’ tactics the Brits are infamous for.  There’s even footage of it on Youtube, it could be an Olympic sport.

The following morning I gave my stale bread breakfast a miss and peacefully secured a sun bed, at 8am. The wind soon picked up and I endured two hours of sandblasting while hawkers waved tat at me before I chucked in the towel, literally.  I was down a layer of skin, but considering some pay hundreds for dermabrasion I reasoned I’d had a free spa treatment really.

I retreated to the hotel pool and claimed the last available sun bed, in the shade.  As the wind reached hurricane speeds, parasols were ripped from their moorings and flew past like javelins.  With every muscle in my body tensed against the cold, and potential impact from flying objects, I had to admit this was not the hot, sunny beach holiday I’d had in mind.  I gave up and returned to my room to see if any new cockroaches had moved in.  The TV didn’t work (obviously) so I watched a movie on my laptop, ignoring the tragic reality that I had flown 2000 miles to watch TV, and waited for evening. 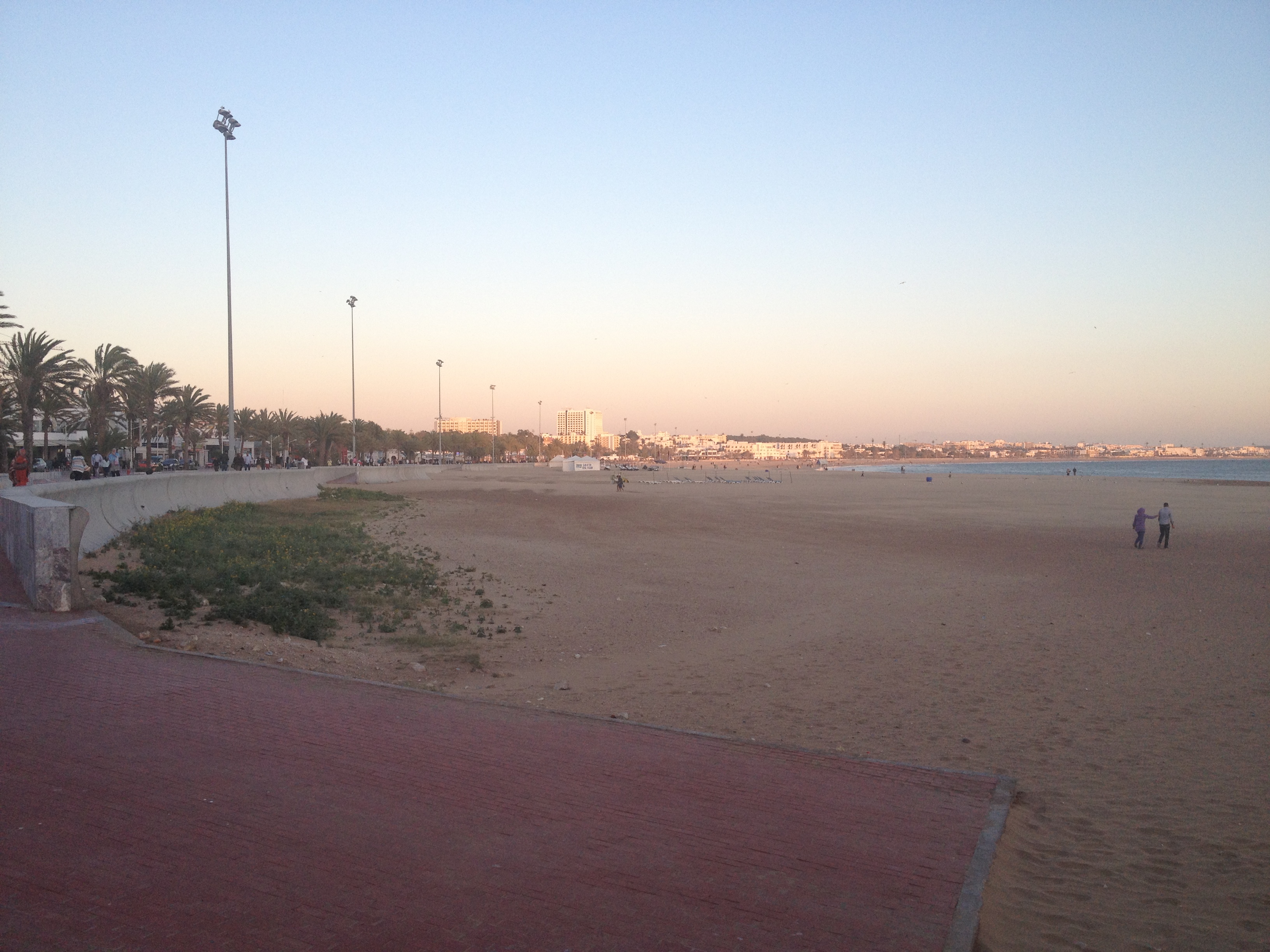 The boardwalk is lined with restaurants, so I went in search of a good Moroccan meal.  Wherever I go I love to people watch – I’ve seen retired gentlemen playing cards over sweet coffee in Turkey, dominos competitively slammed on rickety wooden tables in the Turks & Caicos Islands and conversation illustrated with much arm waving in Italy. It all gives me a feel for the local culture, one of my favourite discoveries from travelling.

On the boardwalk I passed local families out for an evening stroll, but became aware I was getting stern looks, especially from the women.  I was dressed in jeans and a long sleeved top, not dissimilar to the way they were dressed, although my hair wasn’t covered. I tried smiling gently at women walking past, but no change.

I spotted a casual Moroccan restaurant, inside groups of young locals laughed and chatted.  Leaving my shoes at the door, I sat cross legged at one of the low tables, surrounded by scatter cushions and gorgeous patterned lamps.  I placed an easy smile on my face and read my book over a cup of coffee, but looking around at the other customers, I saw the same disapproving looks. I finished my coffee and left. 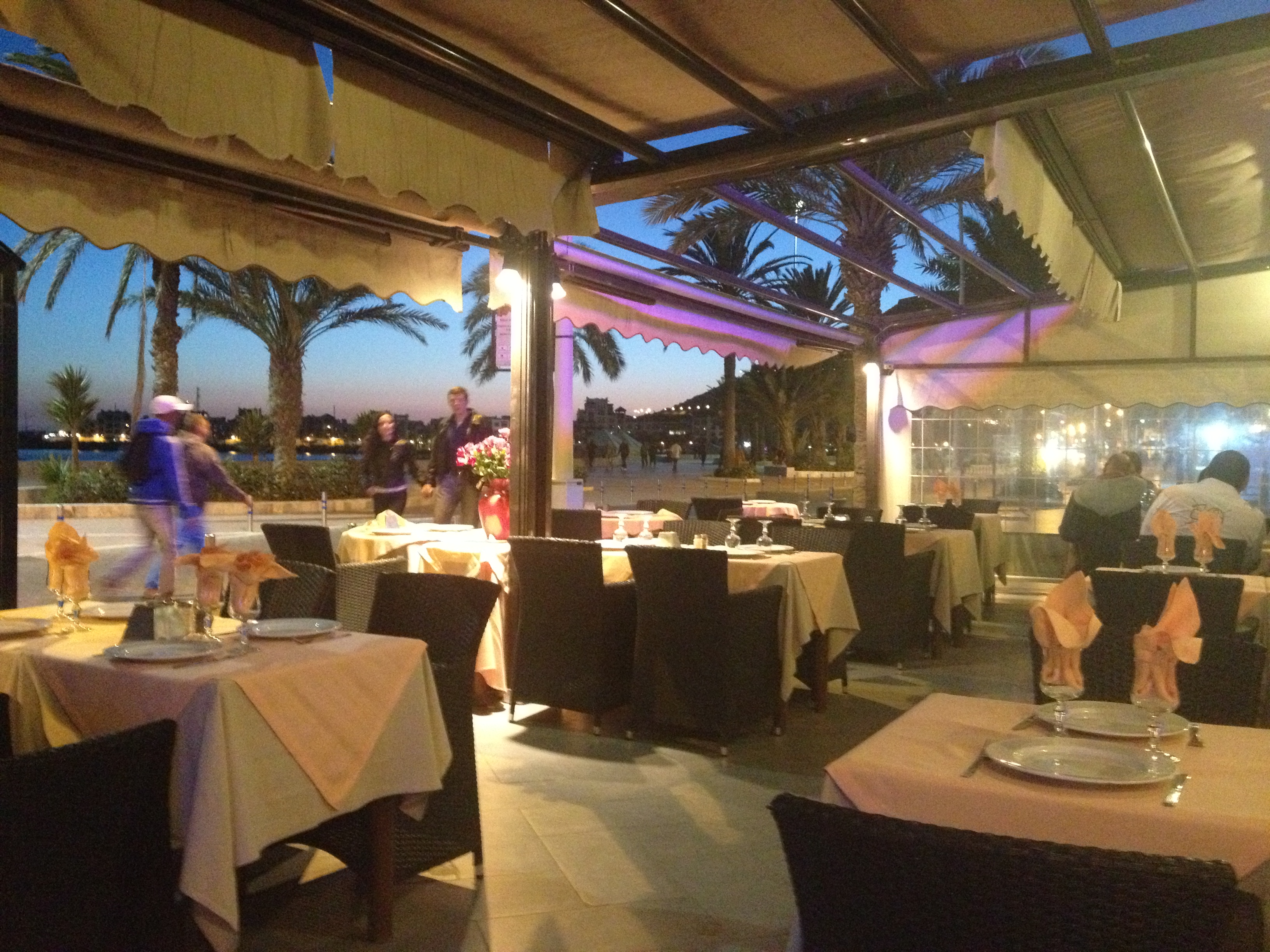 After the same frosty reception in another restaurant I finally lucked upon a friendly waiter in Rugantino restaurant, and settled in for dinner.  I drank the awful local wine, desperate to numb the effects of the day and stayed outside for dinner, ignoring the layer of sand building up on my plate from the ever present wind.  After paying the bill, with a large tip for the friendly service, I was given a rose wrapped in foil.  I walked home with a wobbling bottom lip from such a kind gesture.

By the end of the week I had six roses wrapped in foil brightening my dismal room and had resisted the urge to fly home early, largely because of the prohibitive cost.  I had come to Agadir to relax, but the first couple of days had the opposite effect, so I stuck to what I knew – a sun bed actually in the sun, when I could get one, and the friendly restaurant close by.

Although I felt perfectly safe in Agadir, I didn’t feel welcome.  I’ve found no explanation for this – there are no travel advisories in place and they actively target the European market.  I also didn’t find a whole lot to do, despite the huge potential.  The onshore winds remained strong all week, yet I didn’t see a single boat, windsurfer or kitesurfer out in the enormous bay.  It seemed to me Agadir hadn’t yet found its identity as the tourist destination it was clearly trying to be. 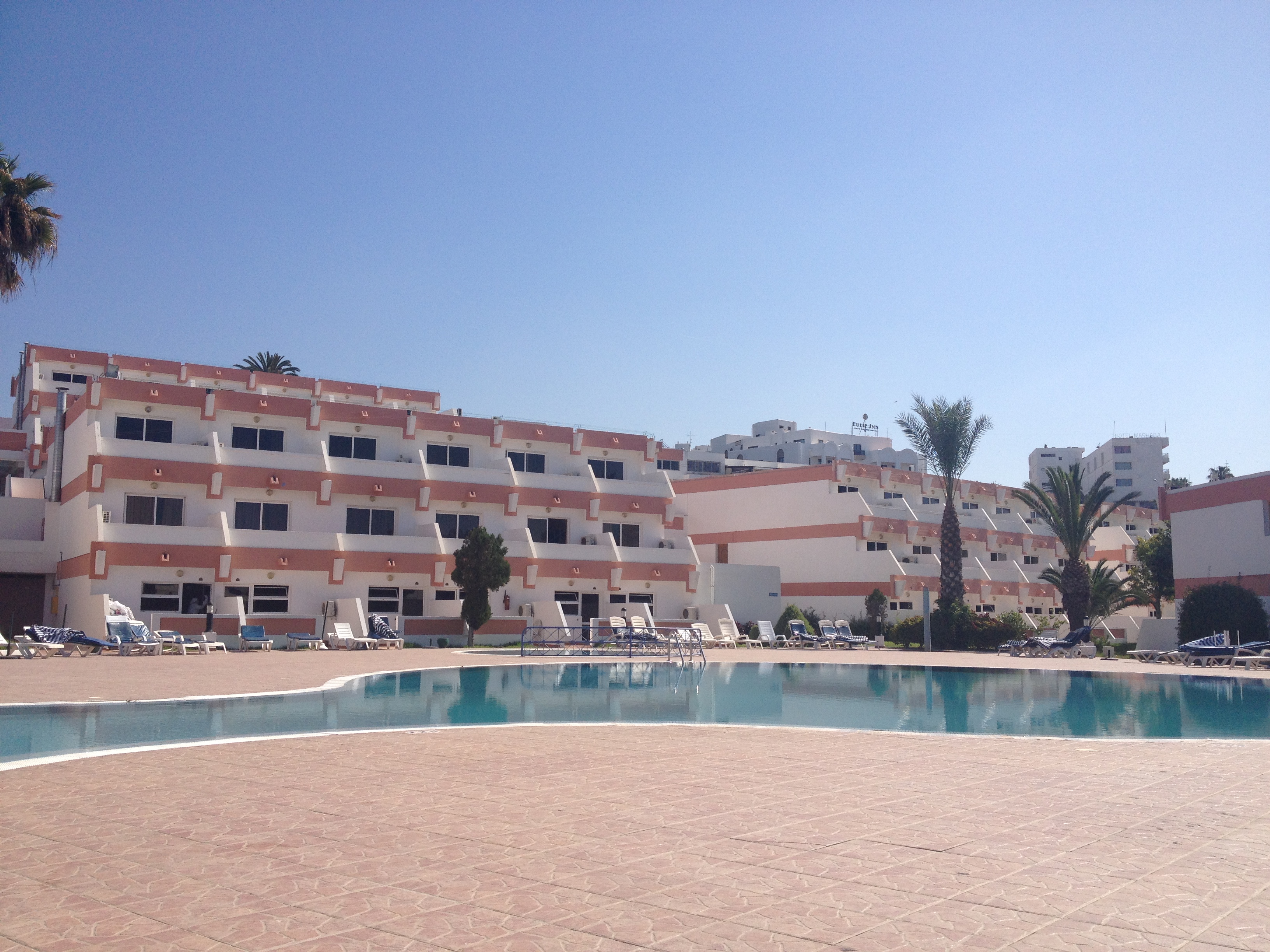 On my final day I checked out of my room and waited for my return transfer to the airport.  The arrangements for this were to have been confirmed by the hotel  who, of course, refused to do so until I complained to the management.

During my long wait in reception (the only area with the promised Wi-Fi) I was approached by a man attempting to gain access to my computer, never have I seen such an obvious conman.  After a polite but firm “no” he moved on to every other woman sat alone in the reception area.

The old adage of ‘you get what you pay for’ is often true, but I’ve had fantastic budget adventures. Egypt is a case in point, I’ve been several times and absolutely loved it.   But where this particular trip was concerned the only highlight was that lovely waiter, and the return flight home.

I certainly haven’t written off Morocco, I would love to see the markets of Marrakech, the remote mountainous areas and who knows what else, it looks and sounds like such a beautiful country. But that’s another trip for another day.