The intensity of the sun during the forty-five minute drive from Athens airport to the city centre, is striking. It’s not just that the sun is astonishingly brighter than in the UK but that it somehow electrifies the whole sky and the mountainous landscape beneath. 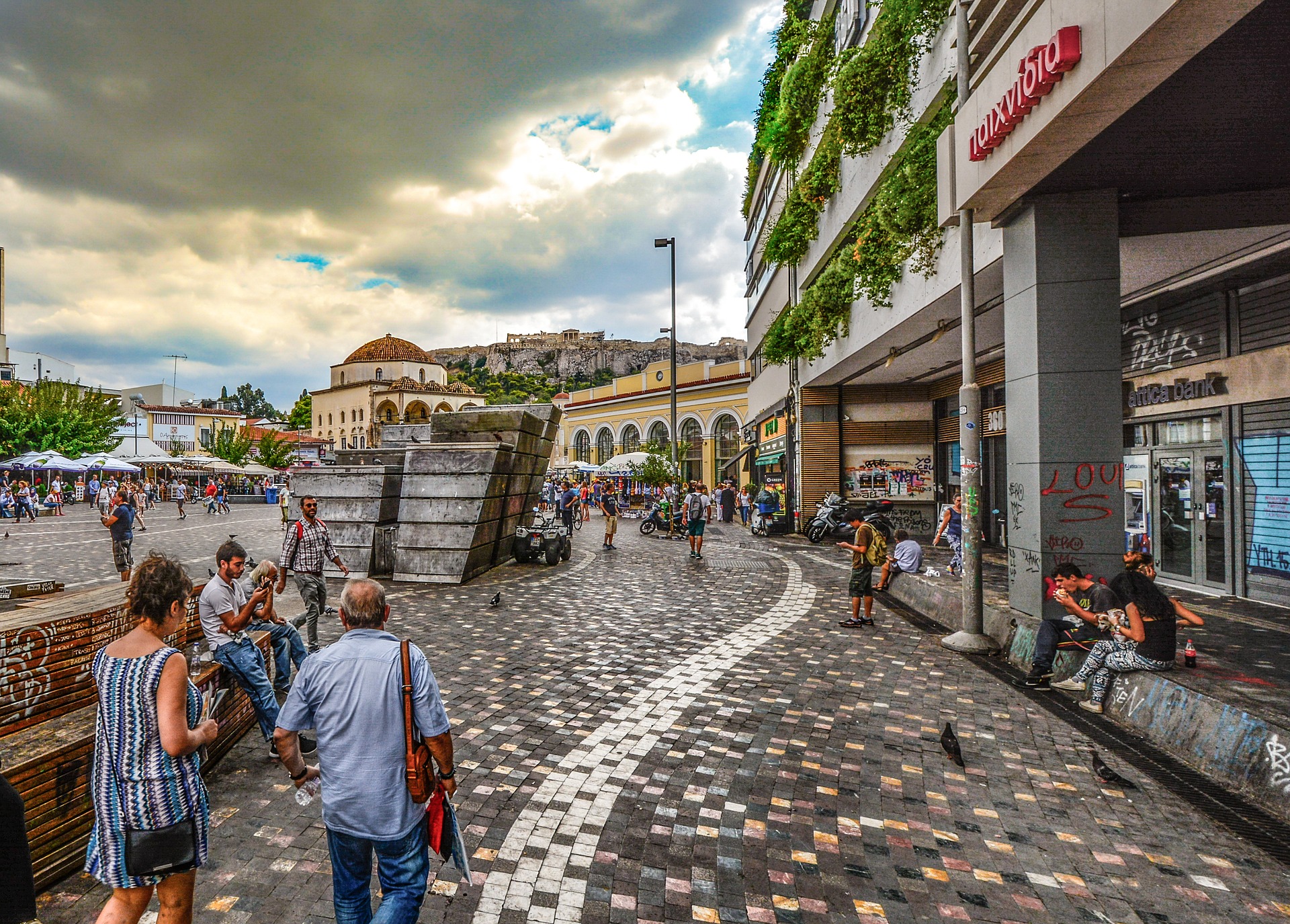 Nearing the city, that brilliance fades. No doubt dulled by the usual cocktail of urban pollution. First impressions of the city centre are grimy streets, scrawled on walls and broken down buildings – a very old city and it shows. The taxi pulled up in one of these less than salubrious neighbourhoods and the driver pointed to a side street of stalls selling junk. In the midst of this chaotic clutter, I found the doorway to my hotel.

Arriving at night and hungry, I dropped off my bag and hurried from the hotel past semi-derelict buildings to find Monastiraki Square just ten minutes away. Its collection of cafes and restaurants serve traditional Greek fare as musicians serenade al fresco diners to a backdrop of trees twinkling with fairy lights. 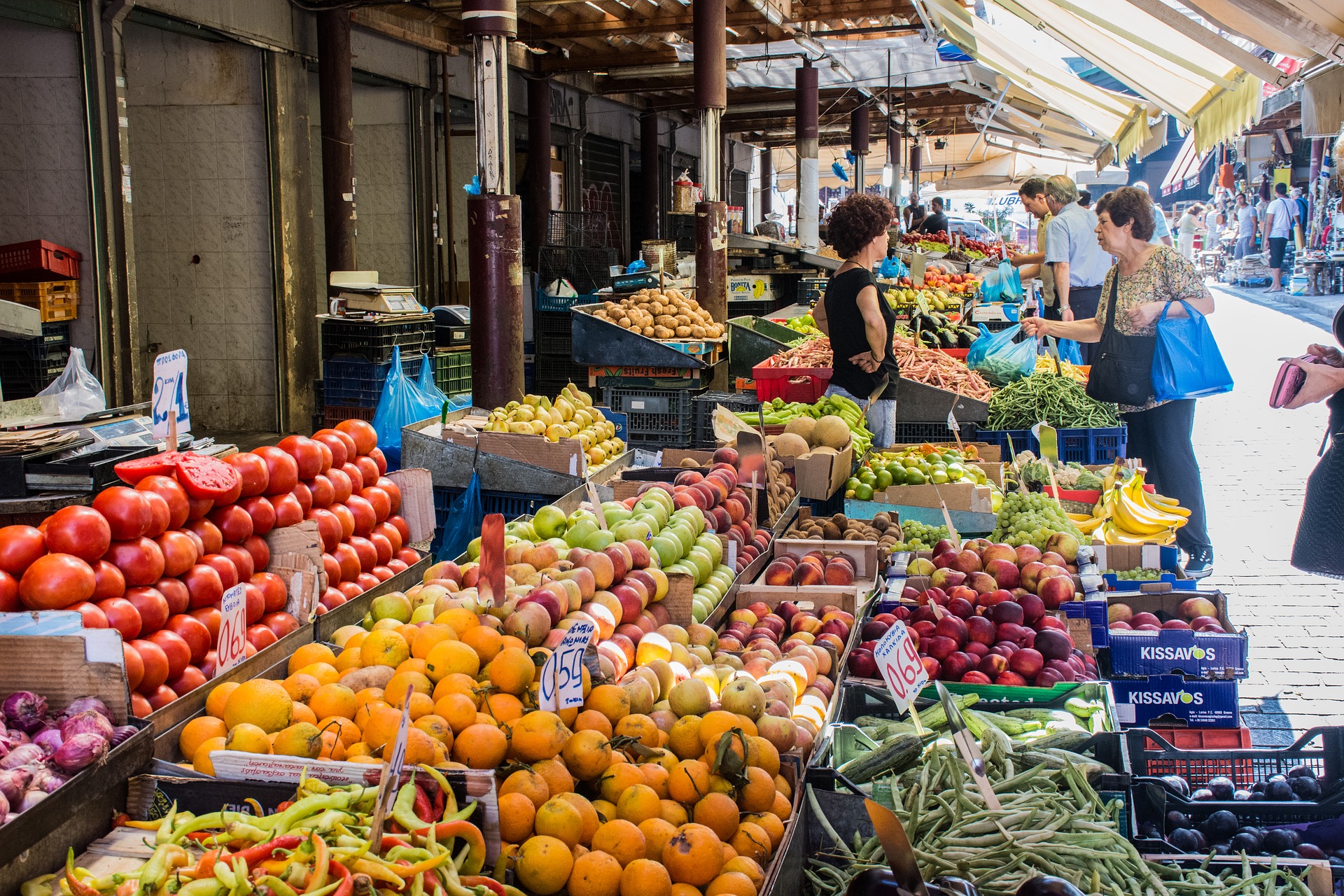 The hotel was proving the perfect location – I discovered the next morning that the cluttered street had transformed into an intriguing market with many more stalls and fresh produce for sale.

The absolute of must-see sites is the Acropolis. It’s a climb. Seriously non-slip shoes are required for the pathways, marble and stone steps leading up to it, worn to a mirrored finish by millions of visitors year on year.

Open from eight until eight, I was told by the hotel customer relations manager, that the best times to go were either before ten or after seven.

I ignored this advice and arrived at ten thirty to find a snaking queue – appropriately, the Acropolis was known in ancient times as Cecropia after the first Athenian king, Cecrops, a serpent-man. This snake, however, slithered swiftly through the ticket barrier allowing huge numbers to pay the pricey €20 entrance fee.

Inside, crowds weaved in waves between the ruins comprising this ancient sun-scorched site. Located on rocks above the city, the views are spectacular but the pathways, marble and stone steps are as treacherous as ice and so uneven, it’s like clambering over glacial rock pools without the cooling pool water.

Leaving here, I strolled towards Plaka – the ‘old’ part of the city, also recommended by the hotelier whose tips and recommendations made the trip. Stopping at a cafe for a cup of delicious White Angel tea, a guy cycled past with a Maltese terrier strapped in a panier behind his seat.

The little dog’s head poked out, enjoying the breeze as they sped along. A common sight. However, this particular pavement rider repeatedly veered so dangerously close to walls that the little dog behind him was twice nearly decapitated.

Plaka has plenty of shops to browse, many selling tourist knick-knacks of varying quality. Just north of here, Perikleous appears to be the street where all the haberdashers’ in the UK that have died in recent years have gone to haberdashers’ heaven. Not just on this street which has a concentration but dotted around all over, interspersed with junk shops. 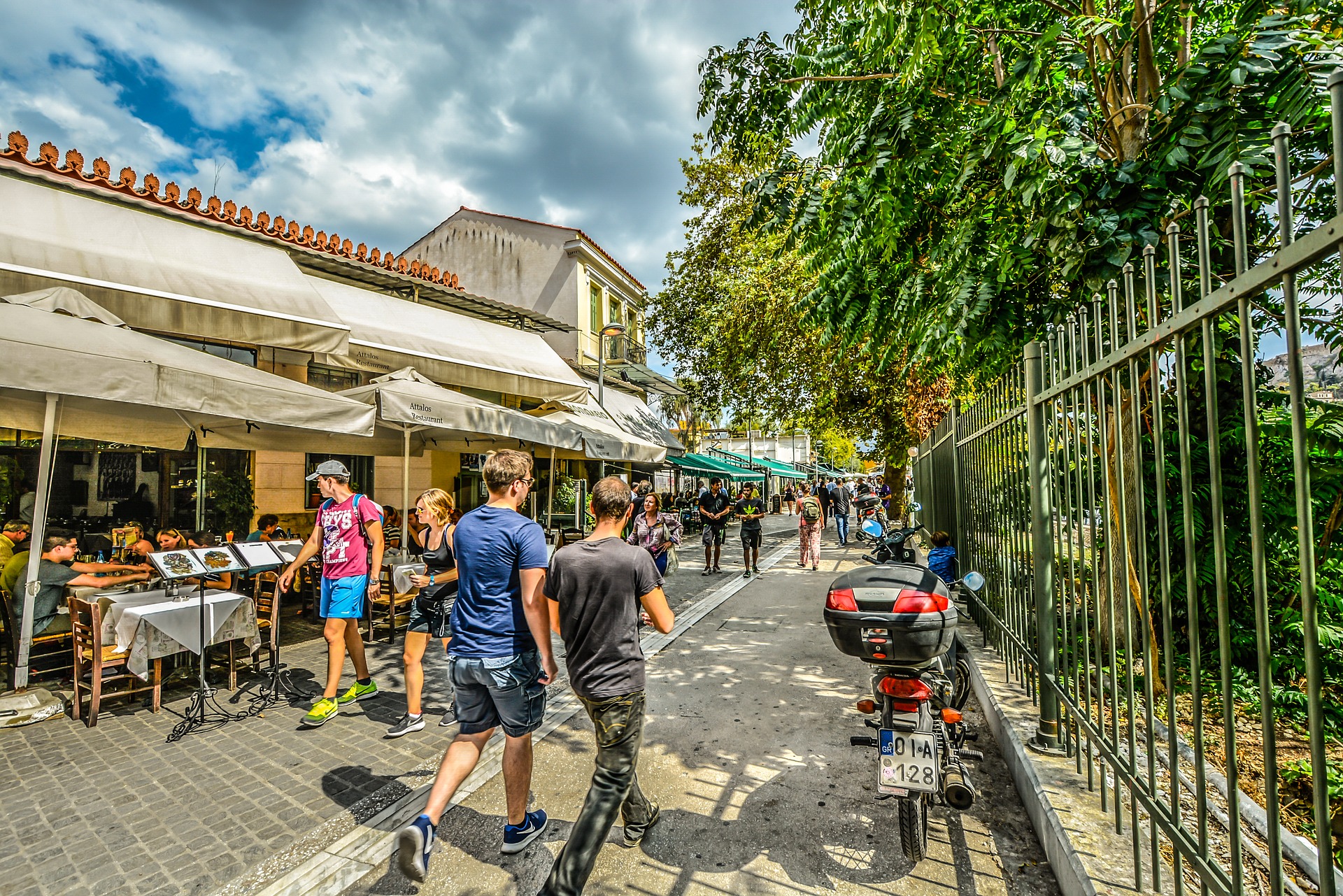 For anyone who likes to rummage bric-a-brac, this city is a must. As well as the cluttered market stalls, junk shops and flea markets, impromptu pop-up car boot sales are evident in the streets which are lined with rows of motorbikes and scooters. Riders rarely bother with helmets.

Cars are in the same state of disrepair as dwellings. Drivers hold steering wheels with one hand, clamp phones to their ears with the other and drive on pavements. Smokers light up wherever and whenever they like. And overlooking the streets, trees growing on apartment balconies are commonplace.

By now, what had seemed at first sight grimy, graffitted and grotty had become more affectionately ‘ramshackle’ and the city’s chaotic nature refreshingly liberating with its creativity increasingly evident.

Next to visit was the site of Aristotle’s Academy in Rigilis to the east of the city. The route took me past the parliament building, catching the display of the hourly changing of the guard and a glimpse of the National Garden.

The Lyceum, as it’s known, is the site of the peripatetic school of philosophy founded by Aristotle. Around the corner on Vasilissis Sofias is Villa Ilissia which houses the Byzantine Museum and, perhaps more importantly, Cafe Ilissia. This has a picturesque setting adjacent to the Lyceum and is the perfect spot to shade from soaring temperatures.

On the other side of the Lyceum is the Museum of Contemporary Art. I ventured in here by mistake due to a lack of signage and looking for the entrance to the Lyceum. Finding the foyer in darkness, an installation could just be made out in an unlit alcove – ghostly blank TV screens encased by inflated silver tubing.

A wide, gloomy staircase descended to a haunting seeming space and had the appearance of a disused, emptied swimming pool horror films often feature. Not keen to investigate further, I hurried outside to find a grid of painted squares on the walkway featuring single words: winner, contradiction, love.

Guessing this was an art school, I discovered only later its lofty museum status. Perhaps, compared to Athens’ impeccable and impressive antecedents, offerings from the contemporary world leave this scorching city cold. Athens’ classicism is still so evident; what could compete?

Even the city’s wonderful chaos and clutter, in the current economic context, seems some sort of legacy from its merchant trading origins when the city’s supremacy was unparalleled.

The trip – flights, transfers and hotel – was booked through British Airways.

Athens Centre Square Hotel – each floor is painted a different colour; the walls, ceilings and doors completely covered in a scheme reminiscent of the garish colours adults invariably inflict on children. My floor was a vivid red. Perhaps this interior scheme is the height of Athens chic. Although, from the city that gave us classicism, this is doubtful. The hotel has a roof terrace bar with amazing three sixty views of the city. Staff are truly delightful.

In Psirri district is Nancy’s Sweethome. As the name suggests, the menu offers an extensive range of cakes, sweets and the like. I ordered Love Cake. This was chocolate cake with a thick covering of oozing chocolate topped with chocolate and finished off with chocolate sauce. Far more chocolate than the menu indicated and three mouthfuls was plenty.

Little Kook: Magic Cafe and Dessert House has a piratical theme –  inside and out, the ubiquitous Athenian junk is put to great effect. Truly worth a visit. The menu offers a small selection of savoury crepes amongst their sweeter offerings.

Athens does not cater well for non-meat eaters although one of the ‘pirates’ at Little Kook said that vegetarian and vegan restaurants are beginning to emerge.