“Life begins at the end of your comfort zone”.

I have an amazing ability to forget I’m afraid of heights.  And so I found myself in a tiny plane an open door, trying to find the right way to tell my fractious skydiving instructor I was having second thoughts.

It had seemed like such a good idea, I was in Byron Bay, coming to the end of my year in Australia.  Byron Bay is of course stunning, and the home town to the lovely scuba diver I’d fallen in love with years before in Ascot (I dare not look him up).  He’d romanticised his home town so well, how better to see it than from the air?  So I signed up for a tandem skydive.  Relatively cheap, half a day, job done.

I arrived for my little training session, which consisted of being shown the gear, told what would happen, told what to do and what not to do.  Basically I had to sit still, wait for the instructor – who would be attached to my back – to jump, spread my arms out and breathe.  The instructor told me people complained their mouths went dry and they couldn’t breathe which he didn’t understand because it was a load of rubbish – I was to find out it was not.  He was clearly weary of the whole touristy one-off jumping situation which left me little room for anything but compliance.

In the plane we went, me wearing some ill fitting overalls.  The other 6 occupants of the tiny twin prop plane were clearly seasoned jumpers so I sat quietly in the corner and watched.  Up we flew over Byron Bay, it was a perfectly clear, sunny day and the views were amazing.  A long, barely spoilt stretch of coast with tiny white caps just visible on the sea, and endless beaches bordering lush green land.  Australia never ceased to amaze me with its raw beauty and striking colours.  And then someone opened the door of the plane.

I shot back into the far corner and grabbed hold of anything and everything that was attached to the plane to prevent me being sucked out like I’d seen so many times in the movies.  And then I remembered, I was about to jump out, by choice.  And I was scared of heights.  Oops.

I looked for a suitable moment to tell the instructor I was a little bit scared but with his face set firmly in the ‘slapped arse’ position I thought I’d wait for a better opportunity.  Then everyone else got up and stepped out of the doorway like it was the most natural thing in the world.  No bracing against the doorway thinking it through, they just tumbled out like they were walking from the lounge into the kitchen.

My instructor now looked thoroughly pissed off, my guess was he wanted to be doing what they were doing and instead he was stuck with me.  He dragged me to the doorway and I heard all sorts of clunk clicks as he clipped god knows what on to me.  I really wanted to talk about it for a minute.  And then he shuffled forward so he was sat on the edge of the doorway, which left me dangling over the abyss like a stranded turtle.  No words came out, just a silent “oh shit”. 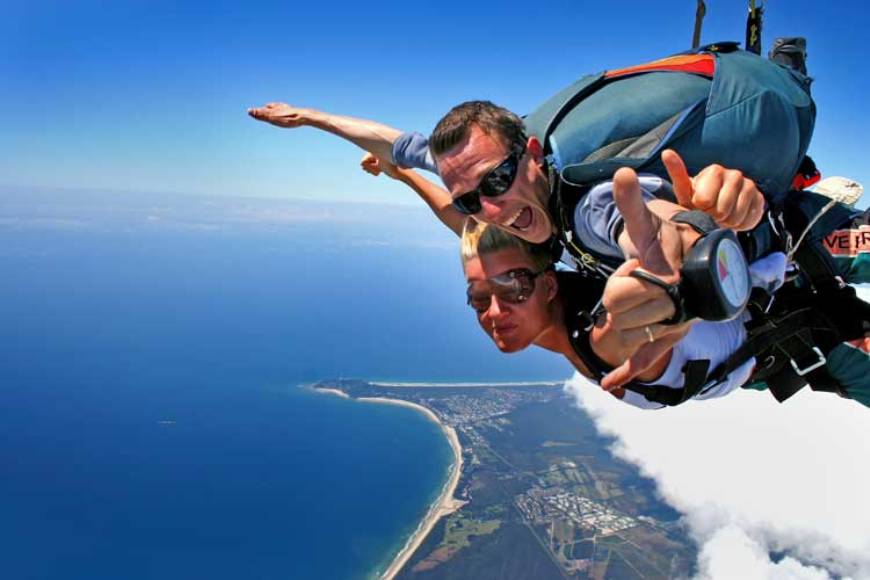 And then we were out.  My first instinct was to scream, at which point air filled my gaping mouth at 120 mph, immediately drying it out and filling my airway, rendering me unable to breathe out, or back in.  So now I knew what he had inadvertently warned me about – clearly he had never been terrified enough to experience the same.  There was nothing to do but go with it, so I did.  Within seconds the chute was open and our descent slowed dramatically, at this point all went quieter and calmer, and I was able to focus on the land below.

There again was that beautiful coastline, but without the hindrance of scratched plane windows and panic.  It was beautiful, just me and nature.  And a man strapped to my back.  He handed me the ropes to steer, and I gently turned us left and right, quite cool really.

Heading towards earth he took over as the drop zone came into view.  It was a relative spot on the landscape but he expertly steered us exactly into the right place for our landing.  I would have rolled all over the floor had it not been for the impressively strong thighs of my instructor which kept us both upright.

And that was it.  Really quite an amazing experience in the end.  While I don’t feel the need to repeat it I can see why people get addicted to the adrenaline and beauty of it.  As for my fear of heights, it wasn’t to be the last time I was terrified at height.  It’s not that I never learn, it’s just that you should try everything once right?!

You can book through Skydive Byron Bay, a tandem dive is approx AU$299.  Good luck!